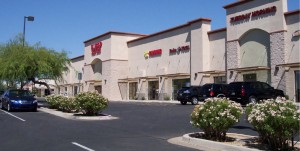 Mesa – Kinetic Companies (Joel Moyes / Jeff Hawke, Principals) of Phoenix, paid $1.45 million ($27.23 per foot) to buy a 53,245-square-foot retail building located at 1135 N. Recker Road in Mesa. The Seller was Arizona Investment Funds, LLC out of California. The buyer was represented by Nick Miner, CCIM of Commercial Properties Inc. in Scottsdale. The seller was represented by Tom Semancik of Commercial Properties Inc. in Tempe. The center was 20% occupied at the time of close. The center was built in 1992 and fully remodeled in 2002. This was the third shopping center acquisition for Kinetic Companies in 2011 in the Phoenix MSA. Kinetic is looking for additional income-producing real estate assets in the Valley, as well as Las Vegas, Denver, Dallas, and Albuquerque. Talk to Kinetic at 480-365-1960.